U-G-L-Y. That spells UGLY folks, and for some animals, well, it’s probably the best description we can muster. We humans love our cute, cuddly animals, but put an ugly one in front of us we may go running and screaming. But not all creatures are picture-worthy. These 5 animals are so ugly, you might just lose your lunch! 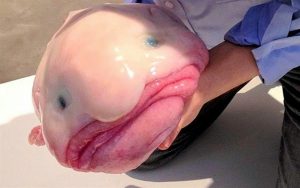 The blobfish completely lives up to its name! When this hideous gelatinous fish is patrolling the ocean floor, it looks completely different. Although its body is not as rigid as most fish, it still looks just like any other fish in the sea. However, its body is composed of a material that is less dense than water. This makes for easy floating at low depths, but take it out of the water and you get what looks like a giant pile of ocean snot! The blobfish is said to taste a little sweeter than crab. We’re not sure who’s actually tried it, but we’ll pass. 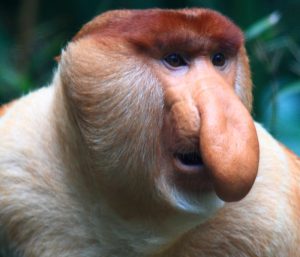 Check out the schnoz on this guy! The proboscis monkey gets its name from its giant honker. However, the term “proboscis” may not be the best on to use. Unlike an actual proboscis which acts like a straw, this monkey’s nose is only good for regular ‘ol sniffing. Their large noses can grow up to 4 inches long. Interestingly, you can easily tell the males and females apart by the shape of their nose. The male’s noses are huge and hang low, while the female’s noses stick out straight. There aren’t enough tissues in this world for these monkies!

Ok, so maybe the naked mole rat isn’t exactly “naked”. After all, these hideous vermin do have a tiny bit of hair. But you’d never known it if you look at them! The naked mole rat lives most of its life underground. You may think this streaking rat should feel a little bit of shame for going around in the nude, but it doesn’t feel a thing! Naked mole rats can’t feel anything at all, in fact, as they lack a certain chemical that processes pain. Go ahead and make fun of these guys all you want. It won’t hurt their feelings! 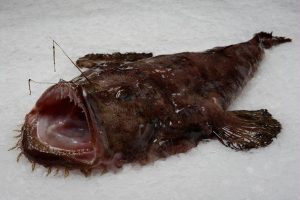 You may want to say a little prayer for the monkfish. These ocean dwellers are so ugly, they spend most of their time at the bottom of the sea, under the sand. They really don’t like anyone gazing at them. With their eyes and their mouths all on the same side of their very flat head, the monkfish look more than a little cartoonish. Don’t take these ugly guys for granted, however. They can do some pretty impressive things. A single monkfish can swallow another fish the same size as its own body! Who cares if you’re ugly when you have skills, right? 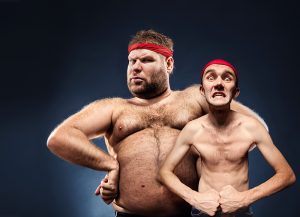 Look in the mirror, folks. We’re not saying you’re ugly. But we all know the truth. Humans can be pretty adorable creatures, but we can also be pretty darn hideous sometimes. We’ve all had moments where we just did not look our best, and let’s face it — we’ve all been downright ugly! Homosapiens can easily win the ugly contest. We don’t even have cute fur! And no, guys covered in body hair really don’t count. Cheer up, fellow homosapiens! We may not be the best looking animals around, but at least we’re at the top of the food chain!

Dino Creek delivers amazing videos and articles covering every possible topic on the planet. Every Monday, Wednesday and Friday, we release an interesting video / article that you’ll want to share with your friends, family, dog, maybe even your step-mother. Whether you want to laugh at the world’s strangest animals or cringe at the worst celebrity behaviors, expect to find the entertaining distractions you’re looking for, right here!
Previous 5 Greatest Warrior Leaders Ever
Next 4 Craziest Frogs