These are the rudest celebrities in Hollywood. They are all 100% douchebags! What is a douchebag? Since this is a family-friendly Youtube channel, we won’t go into the details. We will say this, however: your average douchebag is your run-of-the-mill jerk to just about everyone! Life is full of douchebags, but there’s just something about becoming a celebrity that turns some people into even larger ones. These 5 celebrities are as rude as it gets!

30 Rock star Alec Baldwin is exceptionally good at playing a rude boss on TV. That’s probably because he’s a big ‘ol jerk in real life as well. This mega-celebrity not only left his own daughter harassing phones calls in which he called her a “pig”, he’s even been kicked off an American Airlines flight! When asked to turn off his cell phone, Baldwin threw a massive fit, calling the staff offensive names and slamming the bathroom door. This is one Baldwin brother you may just want to avoid. 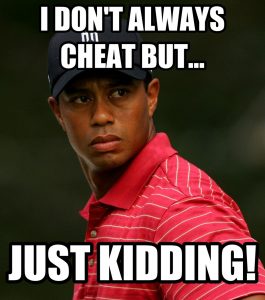 It’s hard to write about Tiger Woods’ douchiness without mentioning his marriage. You know, the one he ruined? Because of his love of excessive female companionship? Woods cheated on his wife with 9 women, despite the fact that they had two children together. As a result, the Tiger lost millions of dollars worth of lucrative endorsements. He also got when he deserved when his now ex-wife took a golf club to one of his favorite cars. Being a golf superstar can certainly pay the bills, but for Woods, it also pays for the expensive alimony.

The name “Kanye West” and the word “douche” should probably share a space in the dictionary. What jerk move hasn’t this super celebrity made? Ever since he upstaged Taylor Swift, it’s all been downhill for West. He never wastes a precious moment in front of a microphone to say something horrendously awful. One of his latest jerk moves? Daring to project himself as poor and trying to start a fundraising campaign for his latest ideas. This is one rapper who can’t stop, won’t stop, thinking only about himself. All the time.

It’s hard not to think of Hugh Hefner as anything but a douchebag. Playboy’s number 1 man (and possibly its only man) has made hundreds of millions of dollars over the years by exploiting women. And sure, the ladies might love him and be fully aware of what they’re getting into, but that doesn’t stop him from using them up and spitting them out to his heart’s desire. Hefner is not only married, but maintains a steady flow of girlfriends. And really… how can we like someone who goes around in a bathrobe all the time?

If you spit on one of your own fans — or anyone, for that matter — you’re a douche. There’s no two ways about it. Yes, Justin Bieber has done that, and more. Hardly a day goes by when we don’t hear about something the Biebs has done to someone or something. Like peeing in a mop bucket at a restaurant. Or drag racing through the streets while drunk, endangering the lives of everyone around him. Or making a 13-year-old girl cry while he tries to steal from the girl’s mother. Yeah, the Biebs is a real class act. And perhaps the douchiest celebrity known to man!

Dino Creek delivers amazing videos and articles covering every possible topic on the planet. Every Monday, Wednesday and Friday, we release an interesting video / article that you’ll want to share with your friends, family, dog, maybe even your step-mother. Whether you want to laugh at the world’s strangest animals or cringe at the worst celebrity behaviors, expect to find the entertaining distractions you’re looking for, right here!
Previous Celebrity Plastic Surgery Gone Wrong
Next 5 Smallest Animals in the World