Over a hundred years ago, mankind mastered the power of flight. Now, thousands of airplanes dot the skies at any given moment! But flying has always been wrought with danger, and as any good pilot will tell you, the most dangerous part of flying is not the take off: its the landing! Before you book your next flight, make sure its not to one of these 5 dangerous airports!
Kansai International Airport, Japan 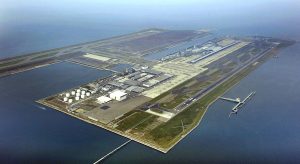 Whats worse than a rough landing at an airport? How about a rough landing on landing strip in the middle of the ocean? Thats a common concern for pilots (and passengers) landing at Kansai International Airport in Japan. This airport is completely surrounded by water, meaning that missing a landing, or a take-off, could mean a watery doom for pilots and passengers. To top it off, the region is prone to earthquakes and tsunamis. 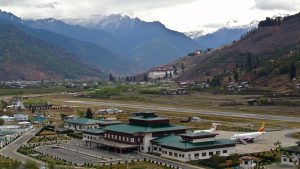 Paro Airport in Bhutan is so dangerous to land at, there are only 8 pilots in the entire world who are qualified to land there. What makes this airport so difficult, you ask? Part of it has to do with the short runway (only 6,500 feet long). The worst part, however, is the fact that the runway is nestled between 18,000 foot high mountain peaks. Pilots even have to gingerly dodge houses on the mountain tops, sometimes coming within mere feet of scraping the tops off! Say a few prayers before boarding a flight to Paro Airport! 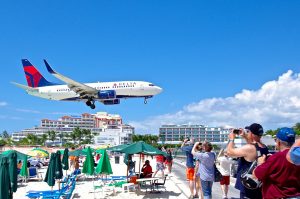 Caribbean Islands are notoriously small. Saint Martin Island is one of the worst. Princess Juliana International Airport squeezes its landing strip on what little land the island has available. This makes for some rather scary landings, with airplanes coming in perilously close to vacationers enjoying a relaxing day on the beach. Be sure to pack your swim trunks and a change of underwear! 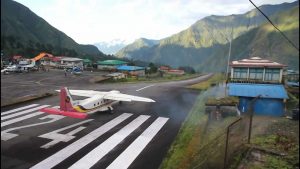 The next time youre taking off or landing at Tenzing-Hilary Airport in Nepal, close your eyes. This mountain airport has a runway that ends with a 9,500 foot drop to certain death. Add to that the frightening regularity of dense fog, pounding rain, and clouds, and you have a nightmare in the making. In 2008, one airplane tried to land amidst limited visibility…and did not quite make it. It crashed against the cliffside. You know what? Driving might be very underrated these days!

Brazil is a fairly large country. But for some reason, they dont seem to like long airport runways. This includes the extremely scary Santos Dumont Airport. Where most airports opt for landing strips of 6,000 feet or more, not so for Santos Dumont Airport. At this airport, you can expect to be thrown violently against the seat in front of you as your plane jerks to a stop on the 1,300 foot runway! Oh, and the airport is located on a rather small island, so a miss means, well a free trip to underwater aquarium.

Previous 5 Smartest Animals
Next 5 Strangest Places You Can Sleep